Comments Off on Chart: China’s Services Activity Contracted for a Third Straight Month in November 2022 Posted by hku68eng on December 6, 2022 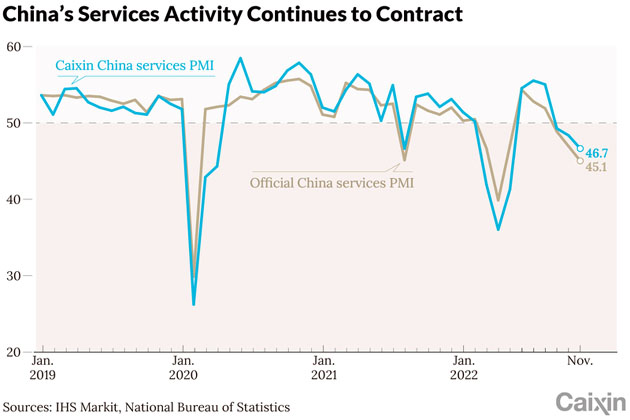 The Caixin China General Services Business Activity Index, which gives an independent snapshot of operating conditions in services industries such as retail and travel, dropped to 46.7 from 48.4 in October. Readings of less than 50 indicate contraction.

The sustained contraction in services activity mirrored that in China’s vast industrial sector — the Caixin China manufacturing PMI for November, released Thursday, stood at 49.4, the fourth consecutive month of a below-50 reading. The Caixin China General Composite PMI, which covers both the manufacturing and services sectors, fell to 47 from 48.3 in October.

Charts: China Official PMIs All Down in November 2022

Comments Off on Charts: China Official PMIs All Down in November 2022 Posted by hku68eng on November 30, 2022 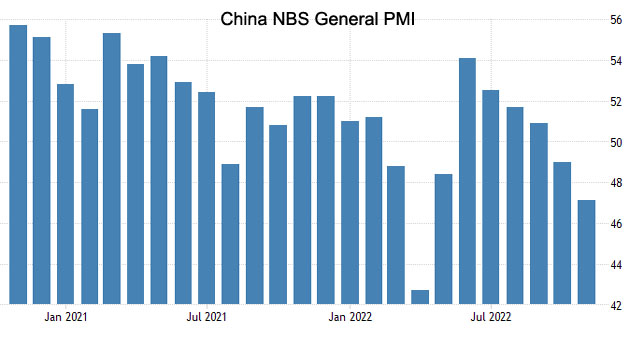 Charts: Both U.S. Manufacturing and Services PMI Dropped Below 50 in November 2022

Comments Off on Charts: Both U.S. Manufacturing and Services PMI Dropped Below 50 in November 2022 Posted by hku68eng on November 23, 2022 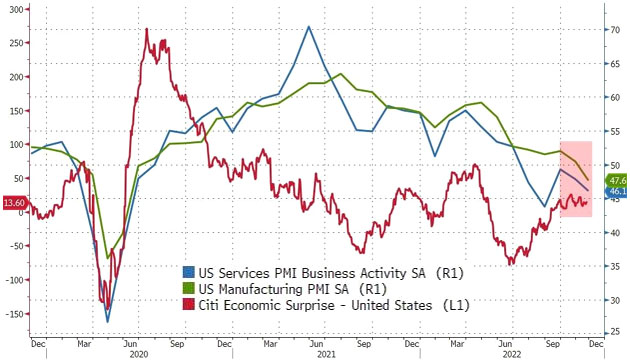 Comments Off on Charts: China Services Activities Contracted Further in October 2022 Posted by hku68eng on November 3, 2022 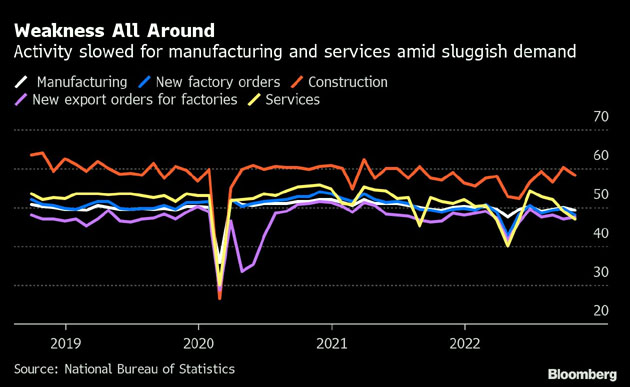 Comments Off on Infographic: EV Charging Stations Across the U.S. Posted by hku68eng on October 29, 2022

Comments Off on Chart: The World’s Best Postal Services Posted by hku68eng on October 29, 2022 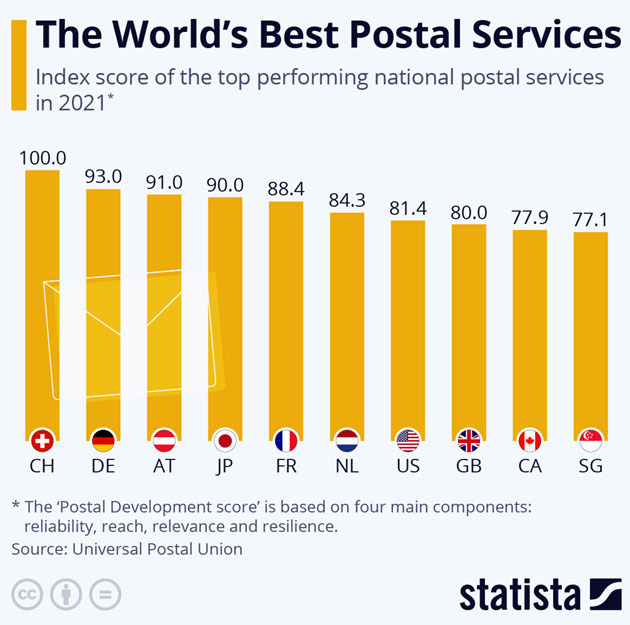 Comments Off on Robots Move into Hong Kong Care Homes, Cleaning Up, Playing Mahjong with Residents Posted by hku68eng on October 21, 2022 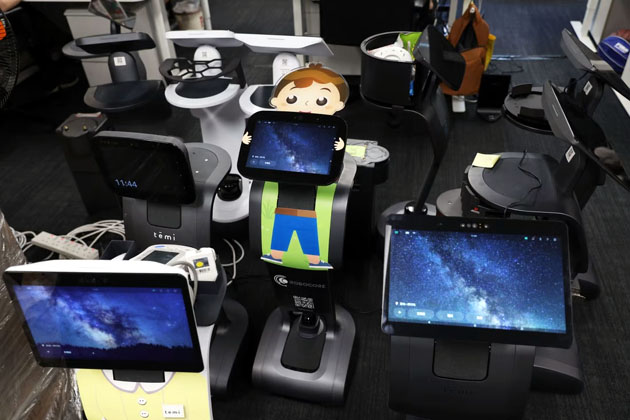 Usually used for video chats and playing music, they were tracked down to the bedside of some residents.

“It turned out the residents had ‘summoned’ them to play mahjong,” said Lim Long-hei, founder and chief executive officer of Robocore, the Hong Kong distributor of Israeli-made Temi robots.

Although the squat 100cm machines were not programmed to play games, the residents had found a way to download mahjong onto them.

The home ended up buying 10 more robots to not only help with repetitive tasks, but also entertain residents, he said.

As robots have become increasingly common at Hong Kong shopping centres and MTR stations and during the Covid-19 pandemic, care homes have found them to be useful assistants for disinfecting the premises, recording residents’ temperatures and connecting them with family members.

Robotic solutions are designed to perform tasks that are repetitive, time consuming and even dangerous. Artificial intelligence drives what robots can do, and more functions may be added by using various applications.

For example, Lim’s team developed a smell-sensing app to detect the odor of faeces and urine, alerting staff of the home to change diapers or bedsheets.

Temi robots are among the innovations featured at this year’s four-day International ICT Expo which was opened on Thursday by Secretary for Innovation, Technology and Industry Sun Dong.

Organised by the Trade Development Council, it features more than 1,100 exhibitors, including the Office of the Government Chief Information Officer, showcasing the use of information and communication technology for “smart city” innovations such as those used to improve search and rescue operations and the safety of hikers.

“Doctors can then speak to patients remotely, reducing infection risks,” he added.

He said more homes for the elderly had begun buying robots since the Social Welfare Department extended its innovation and technology fund in September to include NGOs and private organisations that received subsidies.

The fund was set up in December 2018 to help eligible elderly and rehabilitation services buy, rent and try out tech products that improved their services and eased the burden on staff and carers.

Among the groups that began using robots during the pandemic was the Asia Women’s League, which bought robots for its three elderly homes.

A spokeswoman said they were used mainly for video calls between residents and their families when visitors were not allowed.

“Residents could speak with their loved ones via video without physically moving around,” she said. “They sometimes also sing along to the music the robots play.”

Dignity Kitchen, a social enterprise which runs a restaurant in Mong Kok serving Singaporean food such as Hainanese chicken rice and bak kut teh (pork bone tea), bought robots in April last year that allow 10 employees with physically disabilities to work from home.

Training administrator Nicholas Lai Chi-lok, said: “We trained them to control the robot at home so that they can see what happens in the restaurant, and engage customers by recommending signature dishes and taking orders.”

Comments Off on The Caixin China General Services PMI plunged in September 2022 Posted by hku68eng on October 11, 2022

China’s services activity slipped into contraction in September after three consecutive months of expansion as a fresh round of Covid-19 outbreaks and tightened containment measures disrupted operations and restricted mobility, a Caixin-sponsored survey showed Saturday.

The Caixin China General Services Business Activity Index, which gives an independent snapshot of operating conditions in services industries such as retailing and travel, fell to 49.3 in September from 55 the previous month. Readings of less than 50 signal contraction.

The Caixin China General Composite PMI, which covers both the manufacturing and services sectors, also slipped to 48.5 from 53 in August.

Comments Off on Bathing Services for Seniors Gain Popularity in Aging China Posted by hku68eng on October 6, 2022 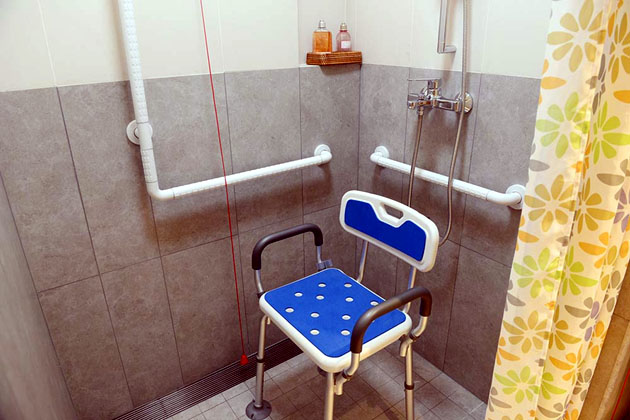 Bathing services targeting the older demographic are picking up steam in China, as the country’s rising aging population seeks convenient means to keep on top of their personal hygiene.

Official data shows that 264 million Chinese are aged 60 and above, and nearly 42 million lived with different forms of disability as of 2020, according to the Chinese National Committee on Aging. Lack of access to regular and safe baths has left many elderly people suffering from personal hygiene issues, as well as being susceptible to risks including injuries from falls that could potentially exacerbate their pre-existing ailments.

First popularized in Japan, which also has a large older demographic, bath visits are a nursing care service whereby caregivers and nurses give professional bathing services in patients’ homes. In China, the service is gradually getting attention, though there isn’t specific data on the number of such centers across the country.

Zhao Rong started a bathing service company for older people in the northern city of Tianjin after working in a similar sector in Japan for five years. His company provides both bathhouse and home-visit services, with the latter costing up to about 500 yuan ($70).

“We had to explain our services to our clients when they first launched last year,” Zhao told Sixth Tone, adding his company has since served 100 clients and delivered 400 various services. “Also, service listing platforms like Meituan are having trouble tagging my store when we try to list the service on the app. But people are becoming increasingly familiar with the service now.”

Zhao’s company, which primarily targets older people, is also shifting its demographic to include younger people with disabilities. But there aren’t clear national guidelines on bath visit services and usually work through the support of local neighborhood committees — this means there is a lack of regulatory standards and insurance coverage, leading to risks for caregivers in the event of accidents.

“None of the 20 insurance companies we consulted provided insurance for elderly bathing services because they said there were so many uncertainties in providing the services,” Zhao said. “We managed to purchase insurance for older people who are visiting the bath house, which is registered as a elderly care center. The compilation of corresponding regulatory standards could take several years.”

Chart: Both Caixin and Official China Services PMI Are Down in August 2022

Comments Off on Chart: Both Caixin and Official China Services PMI Are Down in August 2022 Posted by hku68eng on September 9, 2022