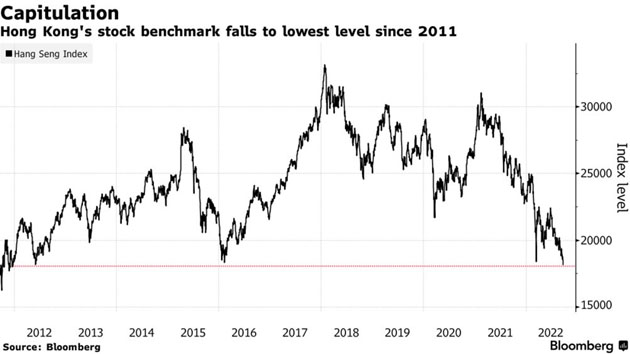 The world’s most acute market risks from the Federal Reserve’s monetary tightening to Beijing’s Covid Zero pursuit are hammering Chinese stocks, pushing a key gauge to the lowest in more than a decade as analysts struggle to predict a bottom.

Hong Kong’s benchmark Hang Seng Index fell 1.6% to close at the lowest level since December 2011. The Hang Seng China Enterprises Index, a gauge of Chinese stocks traded in the city, slid 1.1% after earlier touching levels last seen in 2008. Both equity gauges are among the world’s worst performers this year.

While Thursday’s jolt was part of a global rout spurred by the Fed’s hawkish interest-rate hike, China’s stocks are fraught with unique challenges that reduce the odds of an imminent turnaround despite monthslong policy stimulus.

Beijing remains determined to root out Covid-19 at all costs, while the nation’s property market is going through an unprecedented crisis. Meanwhile, tension with the US runs high over thorny issues including trade and relations with Taiwan and Russia, which raise the risk of Western sanctions.

“Hong Kong stocks are suffering from all these bad news from both China and the US,” said Paul Pong, managing director at Pegasus Fund Managers Ltd. in Hong Kong. “I’m raising my cash level in the portfolio. I think there will be more downside for Hang Seng before we see any meaningful recovery in the second half.”

The Hang Seng Index has lost more than 22% so far this year, extending last year’s decline. Since a market crash at the onset of the pandemic in March 2020, the benchmark has underperformed the MSCI World Index by a whopping 69 percentage points. Mainland companies account for about two-thirds of stocks listed on the Hong Kong gauge.

The losses are particularly jarring in a year when Beijing holds its twice-a-decade Communist Party Congress, an event that has typically boosted the stock market in the past.

It’s not as if Beijing hasn’t acted. The People’s Bank of China is an outlier amid a global wave of aggressive tightening, having lowered a key policy rate twice this year. Authorities have also stepped up fiscal stimulus and loosened home purchase restrictions in some cities to arrest a slump in the property market.

But even as the Hang Seng benchmark’s valuation has plunged to the lowest since Bloomberg data going back to 1993, it’s not looking cheap enough to some investors when pricing in mounting risks. 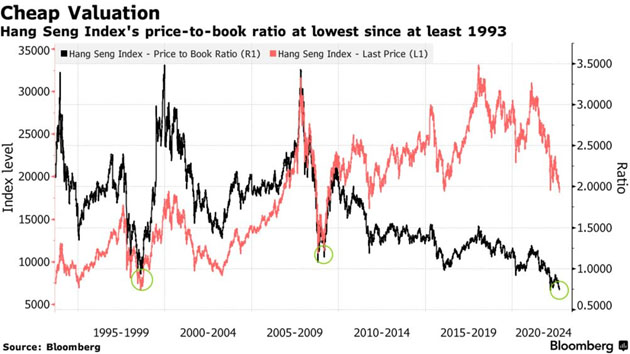 “It’s not time to buy yet as Hong Kong’s stock gauges fall to new lows, with aggressive US interest-rate hikes adding to pessimism around Covid Zero and the ongoing property crisis in China,” said Manish Bhargava, fund manager at Straits Investment Holdings in Singapore.

Unsurprisingly, economists have been revising down their forecasts on the nation’s economic strength. Goldman Sachs Group Inc. lowered its view for China’s 2023 growth to 4.5% from 5.3%, expecting Beijing to stick to its stringent Covid Zero policies through at least the first quarter of next year.

And the growing hostility between Beijing and Washington is a key overhang that caps the potential for any meaningful rebound.

China has been ramping up its rhetoric toward Taiwan, saying it has the patience to someday bring the island nation under control. Beijing’s close ties with Moscow are drawing greater scrutiny from Western leaders for any signs of support.

Despite the gloom, some investors are pinning hopes on the upcoming leadership congress for more policy stimulus, even though the odds of a pivot away from Covid Zero is low.

Mainland stocks have been more resilient than those in Hong Kong on Thursday, with the CSI 300 Index falling 0.9%.

“Any acceleration of policy easing may offset part of the market pressure,” said Richard Tang, head of Hong Kong research at Julius Baer Group Ltd. “Investors will be monitoring for any signs of policy shift from Chinese policymakers during the 20th Congress of the Chinese Communist Party in October.”