Chips are in short supply. Chips are over-supplied. Chip manufacturing has expanded too fast and surpassed demand, but also can’t scale up fast enough to meet demand. The chip business is booming. Chip stocks are falling.

It’s a confusing time to figure out what’s going on in the semiconductor industry.

To understand the contradictions in semiconductor supply chains right now, it’s important to keep in mind that there are many types of chips, built in very different ways. Older generations of chips used to control basic mechanical functions in cars and dishwashers are built using equipment that has been around since the 2000s, while the cutting-edge chips that render graphics and run AI models in the latest smartphones and computers require ultra-precise machinery.

The state of the semiconductor sector is so muddled because the production of some types of chips has already ramped up enough to meet demand, while manufacturing for other types of chips is still catching up. Overall, though, these conflicting storylines are a sign that the chip shortage is finally starting to ease.

Semiconductor supply is rising, and demand is easing

The overall production of semiconductors is rising around the world. TSMC, the world’s biggest chipmaker, increased its planned investment in new plants and equipment from $30 billion in 2021 to $44 billion in 2022. China has invested about $50 billion since 2014 to support domestic chip production, while US lawmakers are (maybe) on the verge of doling out $52 billion in subsidies and incentives for new semiconductor plants in the US.

Meanwhile, South Korea’s Ministry of Economy and Finance reports that Korean chipmakers are sitting on a rapidly growing stockpile of unsold chips. The country, which is the world’s biggest producer of memory chips for electronics like laptops and smartphones, hasn’t seen its semiconductor inventory rise this fast since 2018. 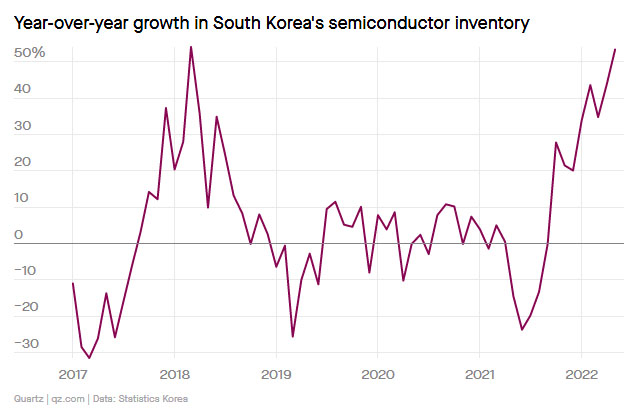 Plenty of chips for smartphones and laptops, but not for cars

Chipmaker Micron Technologies warned investors on June 30 about a looming glut of high-tech memory chips used in smartphones and laptops. Consumer demand for those devices unexpectedly dropped thanks to rising inflation, sagging consumer spending in China, and fears of an impending recession, according to CEO Sanjay Mehrotra. “Given the change in market conditions, we are taking immediate action to reduce our supply growth trajectory,” he said.

Micron Technologies predicted that its smartphone division would ship about 130 million fewer chips than expected this year and its PC division would cut sales by about 30 million chips—a 10% drop in both categories. The downturn will last at least half a year, chief business officer Sumit Sadana predicted, unless a recession hits and brings demand down further.

Meanwhile, automakers are complaining they still can’t find enough low-tech chips to keep their assembly lines running at full capacity. GM, Toyota, and Honda each told investors their sales had slumped in the most recent quarter because of the ongoing chip shortage. Collectively, automakers will build an estimated 3 million fewer cars this year for lack of semiconductors.

Investors are watching semiconductor supply rise while contemplating the possibility that inflation or a recession will cause a drop in consumer demand for everything that uses chips, including electronics, appliances, and even cars. As a result, chip stocks have been plummeting, even though semiconductor sales are still historically high and chipmakers are recording record revenues. The Philadelphia Stock Exchange Semiconductor Index, which tracks big chip manufacturers, has fallen nearly 40% this year, after doubling in value during the pandemic.