Canadian Cities Like Vancouver and Hamilton Top L.A. and Chicago As More Expensive Places to Live 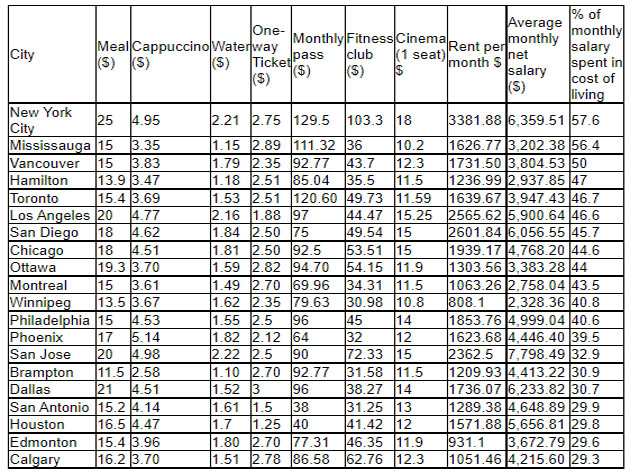 In fact, Mississauga, Vancouver, and Hamilton are more expensive than well known expensive U.S. cities like Los Angeles and Chicago, according to a new study from Canadian insurance provider PolicyAdvisor.

The study looked at the “10 biggest cities by population in each of Canada and the US based on the average cost of eight items in each – a cinema ticket, a meal out, a bottle of water, a cappuccino, one month of gym membership, a one way ticket and a monthly ticket on public transport as well as a month’s rent”.

Topping the list remains New York, which is the most expensive city when “considering cost of living in relation with salary”. The combined cost of the basket of 8 items that the study looked at accounted for 57% of the average salary in New York, the study found.

New York was followed by Mississauga, Canada, at 56.4% of salary, and Vancouver, Canada, at 50% of salary. Both Hamilton and Toronto, Canada beat out well known expensive U.S. cities like Los Angeles and San Diego.

Toronto had the “second highest cost of monthly transport pass after New York” and Hamilton also a high monthly travel pass, at $85. Vancouver was toward the top of the list because of its far lower salary than other cities – people earned just $3,804.53 per month there.

“The impact of the pandemic has made a lot of people reconsider their priorities for both their careers and where they want to live. This data contains some surprising results, as even though some major cities in North America might be perceived as having lower living costs – when factoring in the average salary in the area, it’s not as clear cut,” a PolicyAdvisor spokesperson said.