The late Nobel Prize-winning economist Paul Samuelson once quipped that Wall Street had predicted nine out of the last five recessions. This time, the stock market may be right.

The US economy is starting to show signs of strain under the weight of decades-high inflation and climbing interest rates — raising the risk of a downturn.

Investors are taking note, with equities nosediving this week as earnings gloom at retailers like Walmart Inc. and Target Corp. fueled the growing fears. And the trend could spell trouble for President Joe Biden, whose Democrats must defend thin Congressional majorities in November’s midterm vote.

Squeezed by higher prices for gasoline and food, American households are taking on record amounts of debt to help make ends meet. Socked by higher mortgage rates, homebuilders are turning gloomier about the outlook. Small firms are also struggling with rising business costs and difficulties in hiring or retaining workers.

“I don’t think you can have a completely benign soft landing of the economy at this point,” where inflation comes down but unemployment doesn’t go up, said Ethan Harris, head of global economics research at Bank of America Corp. “We’re either going to have a weak economy or a recession.”

Wall Street economists are cutting their growth forecasts in response to a tightening of financial conditions engineered by an inflation-fighting Federal Reserve. The last six months have seen a drop in equity prices, higher interest rates, and a stronger dollar.

Most economists are betting that the economy has enough momentum — and pent-up demand for automobiles, housing and travel, thanks to savings built up in the pandemic — to carry it through the end of this year without stumbling. It’s next year and beyond where they see the greater danger. And even then, the consensus is for a slowdown rather than a slump.

In a May 18 note, JPMorgan Chase & Co. chief US economist Michael Feroli said he now sees growth easing from 2.4% in the second half of this year to 1% in the latter half of 2023 as the Fed’s hikes cool off demand, like they’re intended to. Goldman Sachs Group Inc. economists led by Jan Hatzius also downgraded their outlook in the past week.

But a growing number of analysts are warning that something worse could be in store.

“We put the odds that the economy will suffer a downturn beginning in the next 12 months at one in three with uncomfortable near-even odds of a recession in the next 24 months,” Moody’s Analytics chief economist Mark Zandi said in a May 16 note.

A lot depends on what happens with inflation and the Fed. If inflation stays well above the central bank’s 2% target — it’s more than 3 times higher now — policy makers may feel compelled to respond forcefully to bring it down, tipping the economy into recession.

The Fed raised interest rates by 50 basis points earlier this month and Chair Jerome Powell has signaled it’s on track to make similar-sized moves at its meetings in June and July.

The Fed chief acknowledged for the first time on May 17 that the central bank’s pivot to tighter policy might result in higher joblessness, though he argued that wouldn’t necessarily deliver a hammer blow. “You can still have quite a strong labor market if unemployment were to move up a few ticks,” Powell told a Wall Street Journal event.

Powell also admitted that the central bank’s ability to pull off what he called a “soft or softish” landing of the economy may depend on events outside its control. Russia’s invasion of Ukraine is pushing up food and energy prices and casting a pall over global growth. China’s strict Covid Zero policy is hobbling the world’s second-largest economy and further snarling supply chains.

History is not on the Fed’s side. After examining 15 Fed tightening cycles since 1950, Bloomberg Economics’ chief US economist Anna Wong concluded that “the central bank will be hard-pressed to avoid a downturn and may need to embark on a steeper rate hike cycle than markets currently expect.”

The housing market is on the front line of the Fed’s drive to slow growth by raising the cost of credit. Since the end of last year, mortgage rates have risen by more than two percentage points, the fastest run-up in roughly four decades. 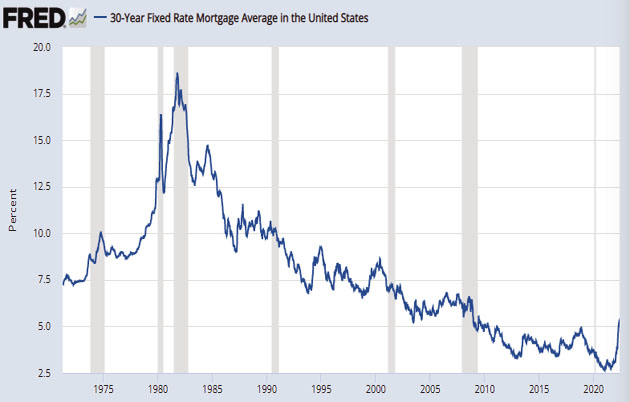 “Housing leads the business cycle and housing is slowing,” said National Association of Home Builders Chairman Jerry Konter, after the industry group reported that confidence among its members slumped for a fifth straight month in May, to the lowest since early in the pandemic.

Doug Duncan, chief economist at Fannie Mae, said he expects the economy to fall into a modest recession in the second half of next year as Fed rate-increases bite. He sees unemployment rising to 4.4% in 2023 — from a current rate of 3.6%, which is close to a 50-year low.

National Federation of Independent Business chief economist William Dunkelberg also sees a recession coming. A majority of small-business owners surveyed by the NFIB in April expect conditions for their firms to worsen over the next six months, the most downbeat outlook in 48 years. About one-third said inflation was their biggest headache, the most since 1980.

Inflation is top of mind for households as well — and a key reason why consumer sentiment, as measured by the University of Michigan, has slumped to the lowest since 2011.

Beset by rising prices, Americans are increasingly relying on credit to keep on buying, according to Goldman’s Hatzius — who reckons that can’t last.

Consumer borrowing “supports spending in the short term but ultimately is not going to be a sustainable source of big increases in spending,” he told Bloomberg Television on May 17. “So it builds in a slowdown, sort of down the road.”

Economy US
← Apple, Google, and Microsoft Will Soon Implement Passwordless Sign-in on All Major Platforms Humour: News in Cartoons →