The European Union Seeks Independence from Russian Oil and Gas 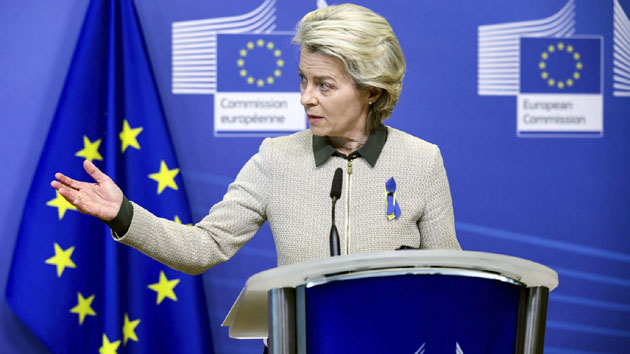 Europe has been hit with exorbitant natural gas prices in recent months because of tight supplies, exacerbated by restrictions by Russia and worries that Moscow would cut flows in response to Europe’s support for Ukraine.

“We must become independent from Russian oil, coal and gas,” the commission’s president, Ursula von der Leyen, said in a news release. “We simply cannot rely on a supplier who explicitly threatens us.”

The proposals will be discussed at a meeting of European leaders in France this week. If enacted by member countries, the measures are likely to be a huge boon for a variety of energy businesses, from the suppliers of liquefied natural gas in Qatar and around the Gulf of Mexico to builders of solar energy parks and offshore wind farms. The question is whether they can be executed rapidly enough to prevent further harm to household finances and the broader economy.

“If we react to the current crisis with a warlike reaction,” said Marco Alverà, chief executive of Snam, the Italian natural gas company, “we can do a lot in six months.”

Other countries are moving swiftly to cut ties with Russia after its invasion of Ukraine. On Tuesday, President Biden announced a ban on U.S. imports of Russian oil and natural gas. “This means Russian oil will no longer be acceptable to U.S. ports and the American people will deal another powerful blow to this war machine,” he said.

Britain also declared on Tuesday that it would phase out imports of Russian oil by the end of the year; Russian gas supplies would not be affected.

The Russian invasion of Ukraine is turning into a watershed moment for Europe on energy matters. Europe has long relied on Russia for a large portion of its oil and gas, trusting in what many European leaders thought was a mutually beneficial business relationship.

In recent months, though, Russia has appeared to exacerbate an already tight natural gas market by declining to provide Europe with any gas above contracted amount. After Russia’s invasion of Ukraine last month, European gas prices have risen to astronomical levels, comparable to more than $500 a barrel for oil. High gas prices have also sent electricity prices much higher, putting pressure on both consumers and businesses.

Clearly, recent weeks have shaken Ms. von der Leyen and her colleagues into action. The proposals announced on Tuesday are a mixture of short-term measures intended to avoid repeating the debacle of recent months in energy markets next year as well as medium-term proposals to accelerate the installation of equipment to generate enormous amounts of clean energy like wind and solar power.

One goal is to cut natural gas imports from Russia by two-thirds this year, while hugely expanding renewable energy, said Frans Timmermans, the commission’s executive vice president for green energy, during a news conference at European Union headquarters in Brussels.

The Russia-Ukraine War and the Global Economy

Rising concerns. Russia’s attack on Ukraine has started reverberating across the globe, adding to the stock market’s woes and spooking investors. The conflict could cause​​ dizzying spikes in prices for energy and food, and severely affect various countries and industries.

The cost of energy. Oil prices already are the highest since 2014, and they have jumped as the conflict has escalated. Russia is the third-largest producer of oil, providing roughly one of every 10 barrels the global economy consumes.

Gas supplies. Europe gets nearly 40 percent of its natural gas from Russia, and it is likely to be walloped with higher heating bills. Natural gas reserves are running low, and European leaders have accused Russia’s president, Vladimir V. Putin, of reducing supplies to gain a political edge.

Food prices. Russia is the world’s largest supplier of wheat and, together with Ukraine, accounts for nearly a quarter of total global exports. In countries like Egypt and Turkey, that flow of grain makes up more than 70 percent of wheat imports.

Shortages of essential metals. The price of palladium, used in automotive exhaust systems and mobile phones, has been soaring amid fears that Russia, the world’s largest exporter of the metal, could be cut off from global markets. The price of nickel, another key Russian export, has also been rising.

Financial turmoil. Global banks are bracing for the effects of sanctions intended to restrict Russia’s access to foreign capital and limit its ability to process payments in dollars, euros and other currencies crucial for trade. Banks are also on alert for retaliatory cyberattacks by Russia.

“Instead of continuing to fund fossil-fuel imports and fund Russian oligarchs, renewables create new jobs here in Europe,” he said.

Mr. Timmermans declined to answer a question on whether the European Union would follow the United States in banning imports of Russian oil. “I think we should wait with our comments until we have heard the announcement,” he said.

Perhaps the most crucial of the proposals aims to fill natural gas storage facilities to 90 percent of their capacity. The idea is to create a buffer against cold weather that eats up gas supplies, and to prevent blackmail by suppliers like Russia.

The magnitude of the task that these proposals are trying to tackle was manifest in some of the numbers the bloc released on Tuesday. Some 45 percent of the European Union’s gas came from Russia in 2021, while Russia was also Europe’s largest supplier of oil at 27 percent, more than three times the next largest, Norway.

The European Union says it will accomplish these goals by saving energy and diversifying supplies. Officials released documents showing that substantial new supplies of liquefied natural gas could come from countries like the United States, Qatar and Egypt. The problem, though, is that Europe will need to compete with other major L.N.G. consumers like China, South Korea and Japan, and the additional demand from Europe might push prices up higher for everyone.

“It is going to be like adding another China in the market,” said Henning Gloystein, a director at Eurasia Group, a political risk firm.

Energy, News, Policy EU, Russia
← When Normality Is Exposed As a Ponzi Humour: News in Cartoons →