‘Stealth Omicron’ Starting to Get Noticed, Setting Off Some Alarms 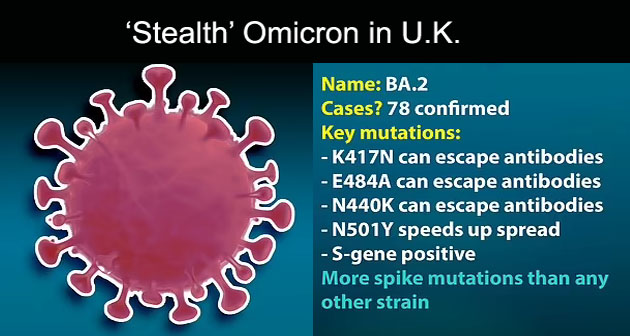 Initial data suggest that it appears to be more infectious than even the highly infectious original Omicron variant.

“Something is rotten in the state of Denmark,” but it has nothing to do with Machiavellian political machinations that the quote alludes to in Shakespeare’s Hamlet. The rottenness this time around has to do with the activity of what some experts refer to as the “stealth Omicron”—BA.2—that appears to be much more infectious than even the highly infectious Omicron—or BA.1.

The Statens Serum Institut, a Danish research institute dedicated to fighting infectious diseases, said in a press release that “the subvariant BA.2 accounted for 20% of all COVID-19-cases in Denmark in week 52 increasing to approximately 45% in week 2. During the same period, the relative frequency of BA.1 has dropped.”

The Statens Serum Institut notes that the strain seems to be spreading in other countries, notably the United Kingdom, Sweden, and Norway. But the spread in those countries at the moment appears much less intense than what’s going on in Denmark.

Not so slow, however, that the health officials in those counties aren’t concerned. The U.K. Health Security Agency just today updated its list “SARS-CoV-2 Variants of Concern and Variants Under Investigation in England” to include stealth Omicron. “Omicron also contains the clade BA.2,” the Agency states. “This is being separately monitored and assessed from a technical perspective and is included in overall Omicron case counts.” The Agency states that it has confirmed 426 cases of stealth Omicron in the UK.

Meanwhile, the World Health Organization (WHO) says that it has identified over 8000 cases of stealth Omicron in more than 40 countries including the US.

Statens Serum Institut also states that “initial analysis shows no differences in hospitalizations for BA.2 compared to BA.1. Analyses regarding infectiousness and vaccine efficiency etc. are ongoing, including attempts to cultivate BA.2 in order to perform antibody neutralization studies. It is expected that vaccines also have an effect against severe illness upon BA.2 infection.”

So, just how much of a threat does stealth Omicron pose?

Like almost everything else about COVID-19, it depends on which expert you ask, although all experts at this point say that it’s too early to tell what stealth Omicron might be up to.